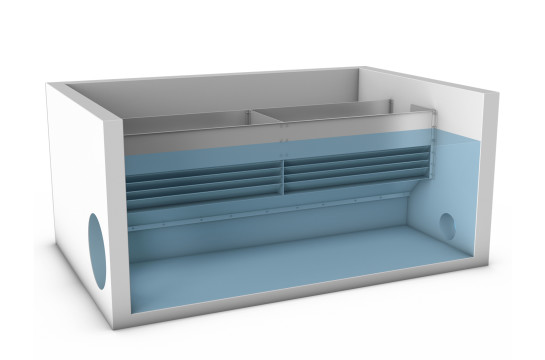 Coarse solids can be discharged into the pre-clarifier in the form of suspended or floating matter during the relief process. In order to prevent this, relief structures were equipped with baffles which were given the task of retaining floating matter (e.g. oils and greases) and solid matter (e.g. sanitary products such as toilet paper, sanitary towels, etc.). The modern, environmentally friendly operation of a sewer system should aim at retaining these residues according to the current state of the art in as far as possible.

The KD lamella baffle, Series OS510 is used for the targeted retention of floating matter in combined sewerage systems/ storm water systems without external energy. A lamella-like arrangement of baffle plates prevents the discharge of solid matter over the threshold into the pre-clarifier. A hydraulically specified arrangement and inclination of lamellas shaped specifically for this purpose ensures that floating matter described herein above is retained efficiently.

You want a free offer?

send us a mail and we will get back to you in 24 hours.